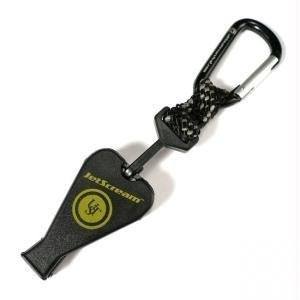 Hover over image to zoom

The JetScream whistle was developed by former U.S.A.F. survival expert Rick Stewart. This unique whistle focuses air streams through harmonically tuned chambers to create a piercing shriek audible over most other natural and manmade noises. Due to its pea-less design, the JetScream even works when wet. Flat enough to fit in a pocket and supplied with a lanyard, the JetScream is just as useful in the city as it is in the woods or snow.

The JetScream can be found in the survival kits of some of the most elite government forces, including the United States Air Force and the Navy Seals.

This product hasn't received any reviews yet. Be the first to review this product!

All prices are in USD